This species of Gorilla can be dived into two subspecies: The Western Lowland Gorilla (Gorilla gorilla gorilla) and the Cross River gorilla (Gorilla gorilla diehli). The Western Lowland gorilla being the most common (As common as this critically endangered species can be) with over 90,000 estimated in the wild and is found in several locations in Central West Africa. The Cross River Gorilla is estimated at just over 250, a scary figure, and is found on the border between Cameroon and Nigeria.

The Ebola virus, poaching, civil war and commercial logging are the main threats to the conservation of these sociable and powerful primates. While the Ebola virus wiped out almost a third of the population between 1991 and 2007 they are, against their nature, fighting back against the humans by means of throwing sticks and stones. This goes against their more common instinct to run. This strange behaviour sadly will not be enough to deter poachers or prevent them from getting caught in the crossfire of the civil wars which rage on in their territory.

The main difference between the Western and Eastern Gorillas is in their size, the Western gorillas being smaller and more agile, allowing them to be sufficient climbers. Their diet consists of high fibre content, mainly eating fruit when it is available, leaves and wood vegetation suffices when fruit is scarce. They are a highly sociable animal living in groups from anywhere between 2 and 30 individuals and are not all that territorial with family’s often crossing paths in the wild. These groups consist of a dominant male and several young males, females and their offspring. 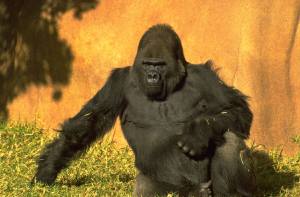 Conservation groups such as the WCS are working hard to improve poaching laws, and establish health centres in areas such as Gabon and Cameroon in order to prevent the spread of a disease like the Ebola Virus. They are also working alongside logging companies to help create a more sustainable and Gorilla friendly method of logging.

Eco-tourism also plays a vital part in the conservation of the Western Gorilla. Through tourism conservation groups can work towards finding a careful balance for locals in that they can find alternatives to bush meat for survival, thus lessening the pressure on the Gorillas. The ZSL (Zoological Society of London) are one such organisation aiding in sustainable tourism and bush meat alternatives for locals. They are also involved in a project in Cameroon helping Timber Company’s management in a way that is less harmful to the Gorilla populations in its logging areas.

The Western Gorilla is in critical danger and needs our help NOW ! So spread awareness and get onto some of the above links if you wish to donate, or help! There is no shortage of information online and if you want to go see these beautiful creatures in the wild (It is an expensive but very worthwhile investment), now is the time and in the long run your efforts will help to conserve the Western Gorilla.